The Federal Circuit said that the failure to use the word “means” creates a rebuttable presumption that §112, ¶ 6 does not apply.  Whether §112, ¶ 6, applies depends upon whether the words of the claim are understood by persons of ordinary skill in the art to have a sufficiently definite meaning as the name for structure. The Federal Circuit said that the term “symbol generator” invokes §112, ¶ 6 because it fails to describe a sufficient structure
and otherwise recites abstract elements “for” causing actions, or elements “that can” perform functions.

The Federal Circuit noted that the patentee’s expert testified that the term “symbol generator” is a term coined for the purposes of the patents-in-suit, and that it was not used in “common parlance or by persons of skill in the pertinent art to designate structure.”  While the expert testified that “symbol” and “generator” are well known terms, the Federal Circuit found that the combination of the terms as used in the context of the relevant claim language suggests that it is simply an abstraction that describes the
function being performed (i.e., the generation of symbols).  Finally, the Federal Circuit found that the claim term “symbol generator,” by itself,
does not identify a structure by its function.

The Federal Circuit examined burden of proof, which encompasses both a burden of persuasion and a burden of production.  The Federal Circuit said that In an inter partes review, the burden of persuasion is on the petitioner to prove ‘unpatentability by a preponderance of the evidence,’ 35 U.S.C. § 316(e), and that burden never shifts to the patentee.”  Where, as here, the only question presented is whether due consideration of the four Graham factors renders a claim or claims obvious, no burden shifts from the patent challenger to the patentee.  This is especially true where the only issues to be considered are what the prior art discloses, whether there would have been a motivation to combine the prior art, and whether that combination would render the patented claims obvious.  The Federal Circuit said that the PTO’s burden shifting framework is directly at odds with its precedent holding that the decision to institute and the final written decision are “two very different analyses,” and each applies a “qualitatively different standard.”  Furthermore, because of the significant difference between the standards of proof at institution and trial during an IPR, it is inappropriate to shift the burden to the patentee after institution to prove that the patent is patentable.

The Federal Circuit said the petitioner continues to bear the burden of proving unpatentability after institution, and must do so by a preponderance of the evidence at trial. See 35 U.S.C. § 316(e). The Board has an obligation to assess the question anew after trial based on the totality of the record.

The Federal Circuit agreed with the patent owner that the Board improperly shifted the burden to the patent owner to prove nonobviousness.  To satisfy its burden of proving obviousness, a petitioner cannot employ mere conclusory statements. The petitioner must instead articulate specific reasoning, based on evidence of record, to support the legal conclusion of obviousness.

Finding that the petitioner failed to separately meet its burden of establishing obviousness, the Federal Circuit reversed.

The Federal Circuit went on to reject the USPTO’s position that the Board is free to adopt arguments on behalf of petitioners that could have been, but were not, raised by the petitioner during an IPR. Instead, the Board must base its decision on arguments that were advanced by a party, and to which the opposing party was given a chance to respond.  The Federal Circuit said that while the PTO has broad authority to establish procedures for revisiting earlier-granted patents in IPRs, that authority is not so broad that it allows the PTO to raise, address, and decide unpatentability theories never presented by the petitioner and not supported by record evidence. 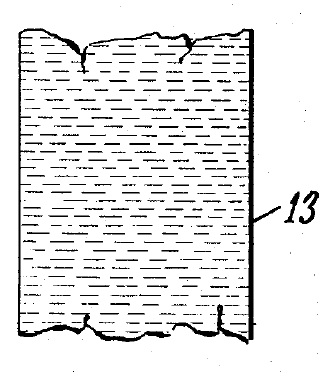 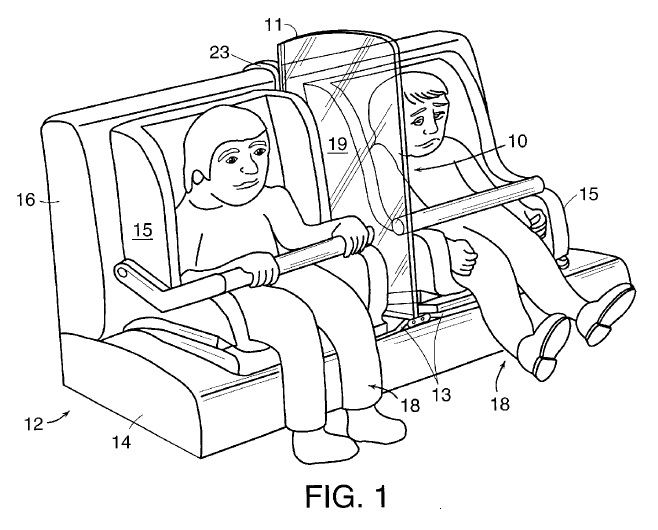 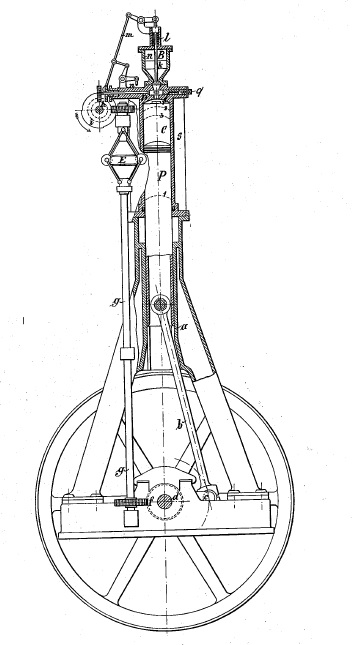 In SkyHawke Technologies, LLC v, Deca International Corp., [2016-1325, 2016,1326] (July 15, 2015), the Federal Circuit granted Deca’s motion to dismiss SkyHawke’s appeal of a PTAB Decision in a reexamination on the grounds that SkwHawke was the prevailing party.

Even though SkyHawke “won” the reexamination, SkyHawke did not like the PTAB’s construction of its claim, and wanted the Federal Circuit to correct the PTABs’ claim construction.  The Federal Circuit observed that Courts of appeals employ a prudential rule that the prevailing party in a lower tribunal cannot ordinarily seek relief in the appellate court.  Even if the prevailing party alleges some adverse impact from the lower tribunal’s opinions or rulings leading to an ultimately favorable judgment, the matter is generally not proper for review.

The Federal Circuit said that SkyHawke will have the opportunity to argue its preferred claim construction to the district court, and SkyHawke can appeal an unfavorable claim construction should that situation arise. With the present appeal, SkyHawke is merely trying to preempt an unfavorable outcome that may or may not arise in the future and, if it does arise, is readily appealable at that time. Therefore,  the Federal Circuit found no reason to deviate from the standard rule counseling against our review of prevailing party appeals.

Even though this case applies to the pre-AIA version of §102, it will have relevance for many years until the last of the pre-AIA patents expire.

It seems that the majority of patent applications, including those that eventually issue as patents, face a “final” rejection at some point.  However, “final” does not not always mean final, and there are at least eight possible responses to a final rejection. 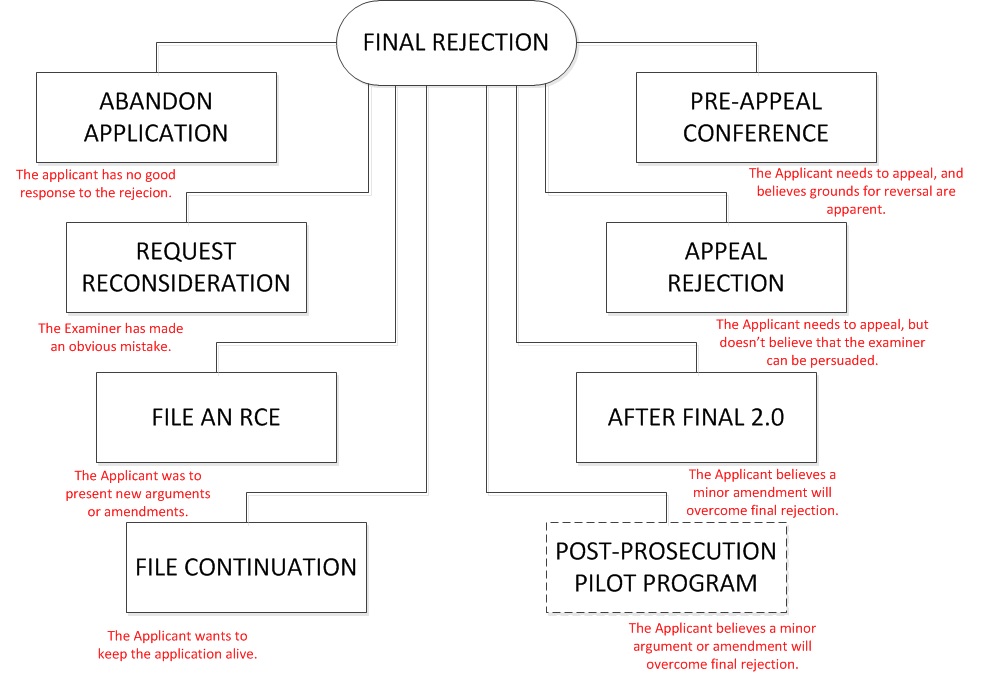 As much as patent prosecutors hate to admit it, every once in a while the Patent Examiner is right, and the only reasonable response to the Final Office Action is to abandon the application.

Sometimes a Final Office Action will be premised on an a clear mistake of law or fact, which if pointed out the the Examiner, will result in the withdrawal of the finality of the action, and perhaps even an allowance.  37 CFR §§1.113 and 1.116 address responses after a Final Office Action.   37 CFR §1.116 limits amendment to three situations:

Generally, an Examiner will not permit an amendment unless it complies with 37 CFR §1.116.  Examiners have no incentive to give any substantial attention to a response after final, and they are rarely effective unless they fully comply with the requirements set forth in the Final Rejection.

If an applicant wants to continue to prosecute the application, presenting additional arguments and evidence, or amending the claims, then the applicant can request continued examination under 37 CFR §1.114.  If an applicant timely files a submission and fee set forth in §1.17(e), the Office will withdraw the finality of any Office Action and the submission will be entered and considered.

RCE’s are a significant part of patent prosecution.  USPTO Statistics show taht approximately 30% of the applications waiting examination are applications in which an RCE has been filed: 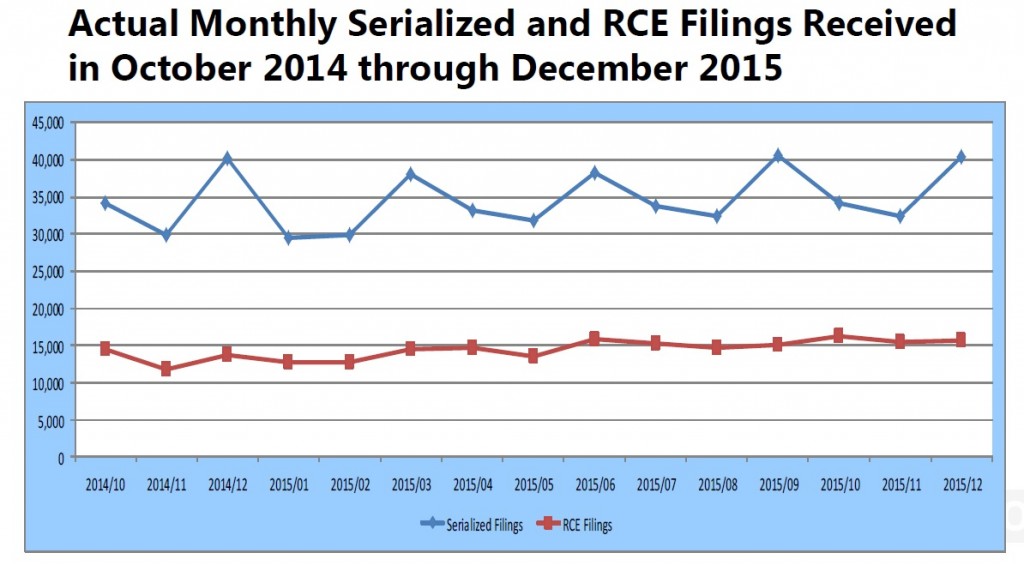 The USPTO treatment of RCE’s has changed over time — in 2009 the USPTO changed the Examiner’s incentives to handle RCE, which resulted in a large backlog, but various changes in USPTO policies have resulted in a steady decline in pendency. 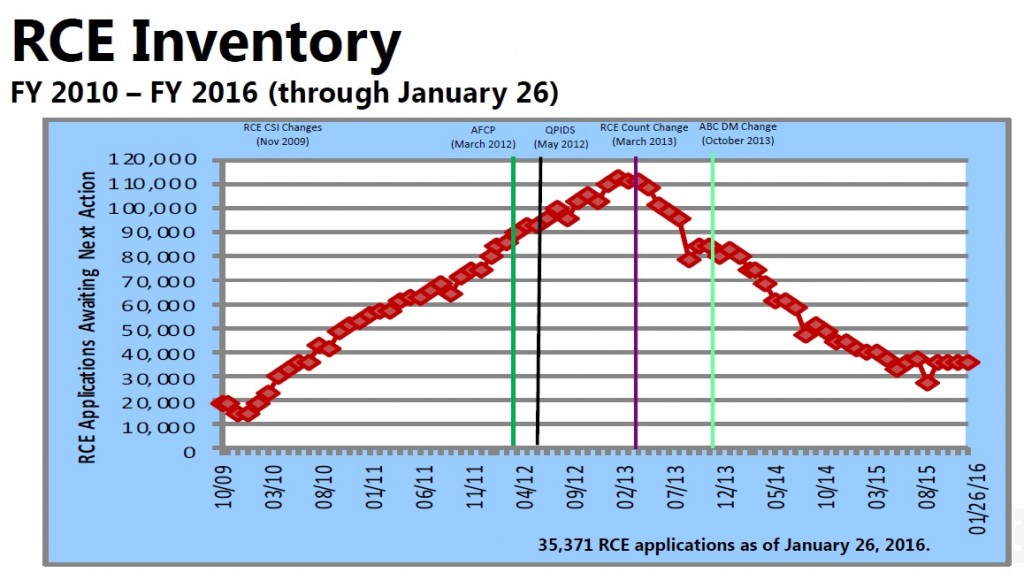 Although a response after final generally won’t be considered, several years ago the USPTO created an After Final Consideration Pilot 2.0 that gives Examiner a limited additional amount of time (and thus an incentive) to consider compliant submissions under the pilot program.  The current version of the program, which expires September 30, 2016, requires that the applicant file:

In response to the AFCP submission, the applicant will receive an AFCP 2.0 response form (PTO-2323) that communicates the status of the submission. If the applicant requested an  interview, the the form will also be accompanied by an interview summary.

One can request an examiner interview after final in the ordinary course, but it is up to the discretion of the examiner as to whether to grant that interview request. Here, under the AFCP 2.0 program, the examiner is given additional time to search and/or consider the response, but also it gives applicants an additional opportunity to discuss the application with the examiner, if the response does not place the application in a condition for allowance. To date, the USPTO has not published statistics on the AFCP 2.0 program.

A new alternative for patent applications beginning July 11, 2016, and extending to January 12, 2017, is the Post-Prosecution Pilot Program or P3 Program.  The P3 Program provides for (i) an after final response to be considered by a panel of examiners (like the Pre-Appeal Brief Conference), (ii) an after final response to include an optional proposed amendment (like the AFCP 2.0), and (iii) an opportunity for the applicant to make an oral presentation to the panel of examiners (new).

The request for the P3 Program should include:

There is no fee required to request consideration under the P3 Program. All papers
associated with a P3 Program request must be filed via the USPTO’s Electronic Filing
System-Web (EFS-Web), and the applicant must not have previously filed a proper request to participate in the Pre-Appeal program or a proper request under AFCP 2.0 in response to the same outstanding final rejection.  The program ends when a total of 1,600 P3 Program requests have been accpted (200 per art unit), or January 12, 2017 whichever occurs first.

For applicants who have made all the amendments they are willing to make, and presented all of the arguments it has, the is one last stop before an full-blown appeal to the Patent Trials and Appeals Board: the pre-appeal brief conference.

In 2015, IP  Watchdog posted the results of a FOIA request for data on the effectiveness of the Pre-Appeal Brief Conferences, the data showed that of the non-defective requests, only 6% resulted in an allowance.  61% of the time, the conference panel decided that there was an issue for appeal.  33% of the time, the conference resulted in a reopening of prosecution, which is at least a partial victory for the applicant.

After all the amendments have been made and arguments presented, an applicant is left with no choice but to appeal,  The cost of an appeal is not insignificant, with a Notice of Appeal Fee, the cost of preparing the Brief on Appeal, and the Appeal consideration fee, an applicant can easily spent $8,000 to $12,000, before oral argument.  The time involved is also considerable — typically three to four years. The current (2016) success rate is about 40%, with Examiner being affirmed about 58.2% of the time, being reversed about 28.0% of the time, and partially reversed another 12.8% of the time.

forming a website collective whose members include a plurality of different websites characterized by a common parameter including at least one of a common content topic, and/or a common contractual arrangement.

The Examiner took exception to “and/or” rejecting the claim as indefinite.  The Board of Appeals reversed the Examiner, agreeing with Mr. Gross that “‘and/or’ covers embodiments having element A alone, element B alone, or elements A and B taken together.”  The Board did add that the preferred verbiage” would be “at least one of A and B” and not “at least one of A an/or B.”

Thus “and/or” in a claim is not necessarily indefinite, but it is not the preferred way to write a claim.

In Amgen Inc. v. Apotex Inc., [2016-1308] (July 5, 2016), the Federal Circuit affirmed a preliminary injunction against Apotex from entering the market until 180 days after giving Amgen Notice after receiving its FDA license.

The Federal Circuit held that the commercial marketing provision of the Biologics Act was mandatory.