The Background of the Invention, sometimes called the “fairy tale” by older practitioners (there are number of examples where the background actually contains the fairy tale beginning “once upon a time”– see U.S. Patent Nos. 7,715,960, 7,207,929, 5,537,417 and 4,206,568), not surprisingly sets for the background information and often identifies the problem(s) solved by the invention.

One of the greatest (although not necessarily the best) “backgrounds” in a U.S. patent is found in U.S. Patent No. 4,646,382 on a Lottery Ticket Scraper, where the background ties the subject ticket scraper to the rise of civilization from primitive cultures: 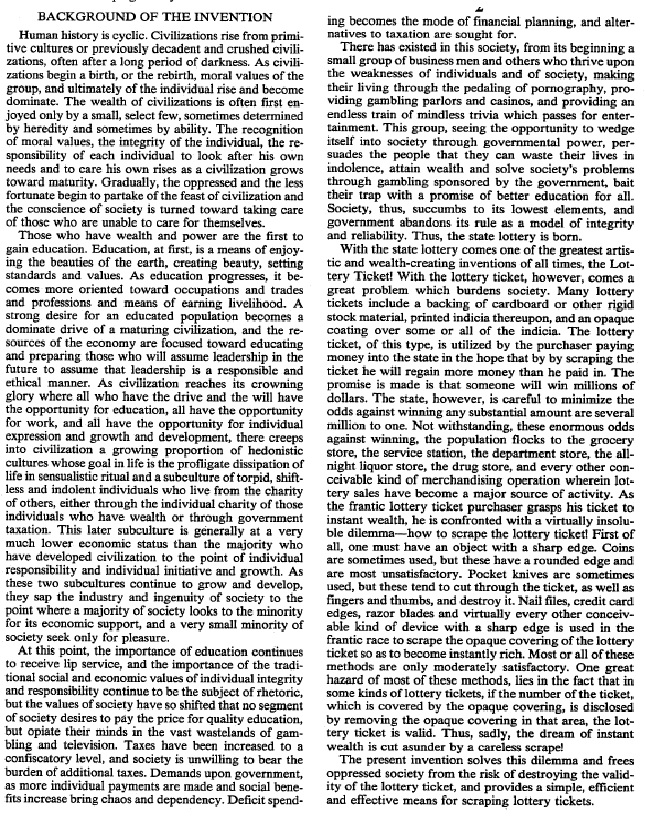 In contract, the best background is probably one that says as little as possible.  A background prepared after the invention (and they all are) can tend to make the invention look obvious, describing the problems of the prior art in such a way that the inventor’s solution almost seems obvious.  This appears to be the case in the Federal Circuit’s recent decision in Intercontinental Great Brands LLC v. Kellogg North American Co., discussed here, where the identification of the problem to be solved in background formed a part of the overall obviousness determination.

In preparing the background of a patent application,

It turns out that Mom was right when she said: “If you can’t say anything nice about someone, don’t say anything at all.”  Criticism of the prior art can limit the scope of your claims.  In UltimatePointer, LLC v. Nintendo Co., 816 F.3d 816 [118 USPQ2d 1125, 1130] (Fed. Cir. 2016), the Federal Circuit found that the patentee’s disparagement of indirect pointing devices supported the conclusion that such devices were not encompassed by “pointing device” in the claim.  The Federal Circuit said that “the repeated criticism of indirect pointing” clearly pointed to the conclusion that the “handheld device” in the claims is limited to a direct-pointing device.

forming a website collective whose members include a plurality of different websites characterized by a common parameter including at least one of a common content topic, and/or a common contractual arrangement.

The Examiner took exception to “and/or” rejecting the claim as indefinite.  The Board of Appeals reversed the Examiner, agreeing with Mr. Gross that “‘and/or’ covers embodiments having element A alone, element B alone, or elements A and B taken together.”  The Board did add that the preferred verbiage” would be “at least one of A and B” and not “at least one of A an/or B.”

Thus “and/or” in a claim is not necessarily indefinite, but it is not the preferred way to write a claim.

Design patents protect the appearance of articles of manufacture, and this includes articles of manufacture whose appearance changes over time.  In particular, animated displays on computers and other electronic devices can be protected with a design patent.  The drawings of are a series of still images of the animated design, showing the progression, somewhat like a “flip book.”  Thus, U.S. Patent No. D698,363 protects a spinning design by showing for sequential images:

U.S. Patent No. D612,861 shows an animated screen transition over seven images, four of which are shown below: 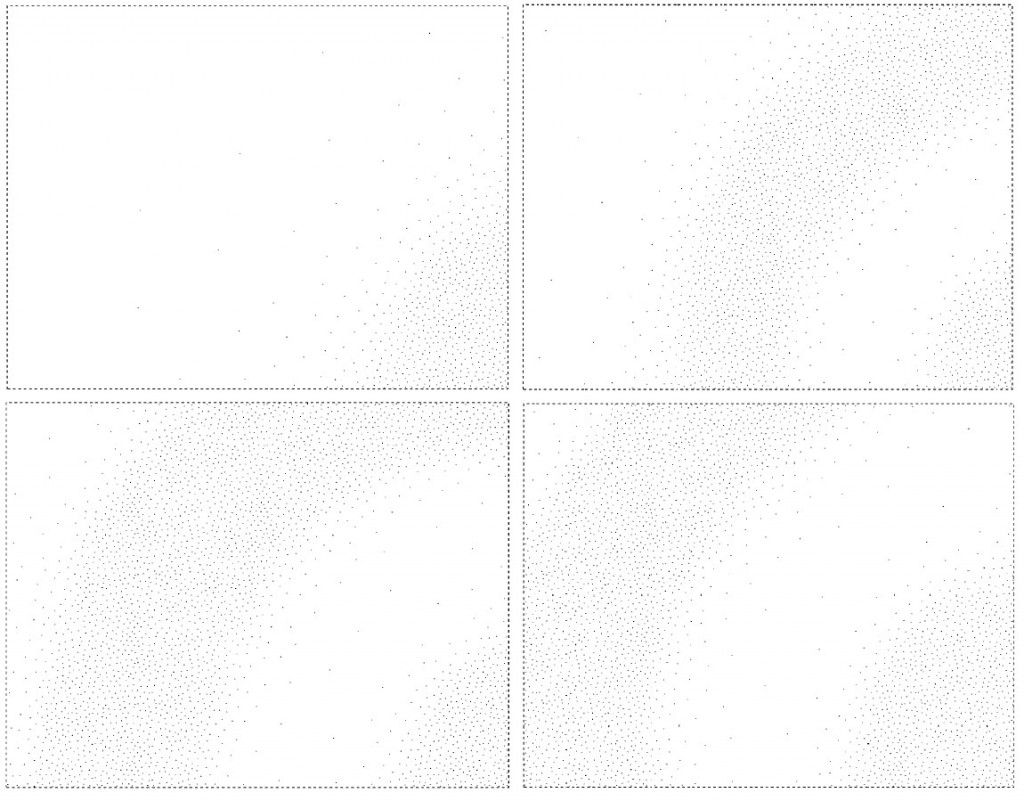 The patent describes the figures:

It is pretty well known that icons can be protected with design patents, however we continue to adhere to the fiction that it is not the icon we are protecting, but the substrate decorated with the icon that we are protection.  U.S. Patent No. D697,530 illustrates one technique for protecting an icon that could appear on both a computer display and a printed display:

The icon on the computer screen is simply shown with a dashed border separating the icon from the rest of the screen, which is not depicted.  The icon on the printed matter is shown within its own border, and with a slightly different dashed border separating the icon form the rest of the printed material on which it is depicted.

All manner of boiler plate can be found in patent applications and issued patents, placed there by applicants and their counsel hoping to influence the future construction of their specification and claims, but the language in U.S. Patent No. 8,047,178, requests a “charitable and common-sensical” claim construction.  Unfortunately, that’s probably too much to ask for. 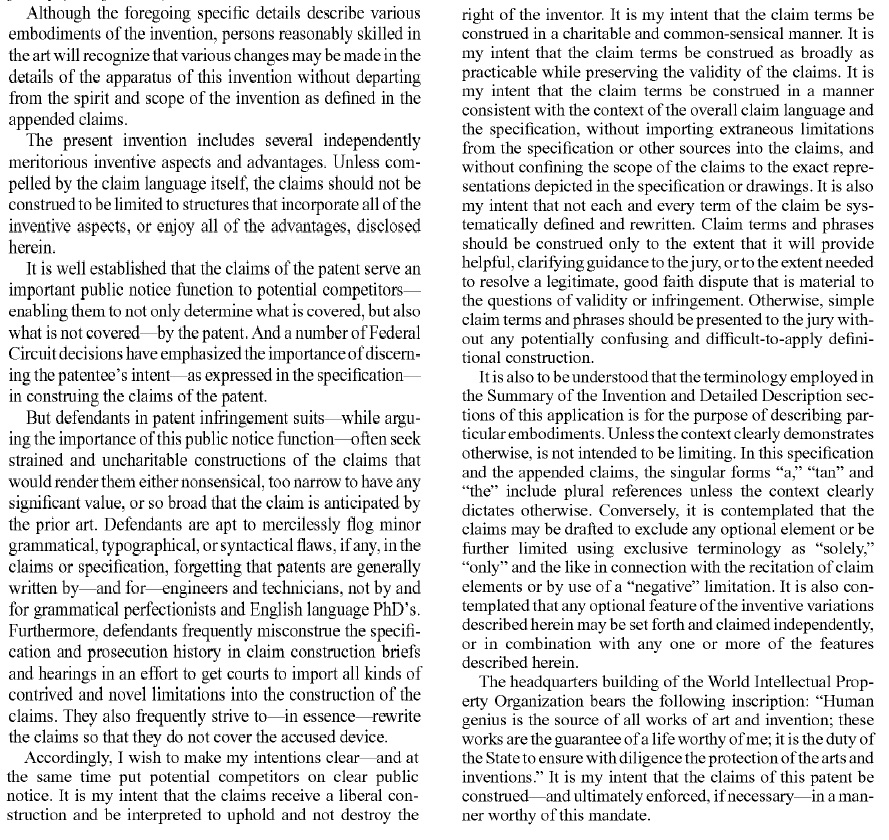 In Bamberg v. Dalvey, [2015-1548] (March 9, 2016), the Federal Circuit affirmed the PTAB’s decision in an appeal from a consolidated interference proceeding refusing to allow the claims of four patent applications because the specification failed to meet the written description requirement of 35 U.S.C. § 112.  The involved claims disclose a method for the transfer of printed images onto dark colored textiles by ironing over a specialty transfer paper. The transfer paper generally contains: (1) a removable substrate coated with silicon, (2) a hot-melt adhesive, (3) a white layer, and (4) an ink-receptive layer.  During the interference proceeding, Dalvey alleged that Bamberg’s claims were unpatentable for lack of written description, because the claims recite a white layer that melts at a wide range of temperatures, while Bamberg’s specification discloses a white layer that does not melt at ironing temperatures (i.e., below 220°C).

The Federal Circuit agreed that the contested claims are properly construed to encompass a white layer that melts above and below 220°C, and thus Bamberg’s specification must also support a white layer that melts above and below 220°C to satisfy the written description requirement.  The Federal Circuit concluded that substantial evidence supports the Board’s determination that Bamberg’s specification fails to meet the written description requirement.  Bamberg’s specification stated that the white layer “comprises or is composed of permanently elastic plastics which are non-fusible at ironing temperatures (i.e. up to about 220°C) and which are filled with white pigments—also non-fusible (up to about 220°C),” and that the “elastic plastics must not melt at ironing temperatures in order not to provide with the adhesive layer . . . an undesired mixture with impaired (adhesive and covering) properties.”  The Federal Circuit found that Bamberg did not possess a white layer that melts below 220°C because it specifically distinguished white layers that melt below 220°C as producing an “undesired” result.  This criticism effectively limited the scope of the disclosure.

In patents, as in life, Mom was right:  If you can’t say something nice about the prior art, don’t say anything at all.  Otherwise, your criticism may be treated as a disclaimer of claim scope.

In The Dow Chemical Co. v. Nova Chemicals Corporation (Canada), [2014-1431, 2014-1462] (August 28, 2015) the Federal Circuit applied the change of law exception to reject Dow’s bid for supplemental damages for infringements occurring after the original judgment — the change of law being the change of the standard of indefiniteness resulting from the Supreme Court decision in Nautilus, Inc. v. Biosig Instruments, Inc., 134 S. Ct. 2120 (2014).

Under Nautilus a patent is invalid for indefiniteness if its claims, read in light of the specification delineating the patent, and the prosecution history, fail to inform, with reasonable certainty,those skilled in the art about the scope of the invention.  The Federal Circuit held that “the required guidance is not provided by the claims, specification, and prosecution history.”  The Federal Circuit said that a claim term is indefinite if it “leave[s] the skilled artisan to consult the ‘unpredictable vagaries of any one person’s opinion.’” The Federal Circuit concluded that the claims here are invalid as indefinite, and the award of supplemental damages must be reversed.

While measured parameters with numerical values at first appear to be definite, patent drafters must be clear about how those parameters are measured — at least where the value can vary depending upon the method used.

Stock language for advertisements and syndicated columns were cast or stamped in more durable materials such as steel for distribution and local printing.  Apparently from their resemblance to the steel plates used in the construction of boilers, the plates, and eventually the stock material on them, became known as boilerplate.  Eventually usage of the term “boilerplate” was applied to stock language in any document, such as contracts, and even in patents.  Boilerplate sentences and paragraphs are common in patents, but does it ever really make a difference?

Boilerplate can indeed make a difference, and thus it probably is good practice to include it in patent applications.  For example in Hill-Rom Services, Inc. v. Stryker Corporation, —F.3d — (Fed. Cir. 2014), the Federal Circuit cited boilerplate language (although not identifying it as such) that the “description of various embodiments” is not intended “to restrict or in any way limit the scope of the appended claims to such detail” in determining that the tem “data link” was not limited to the particular wired data link described in the specification. 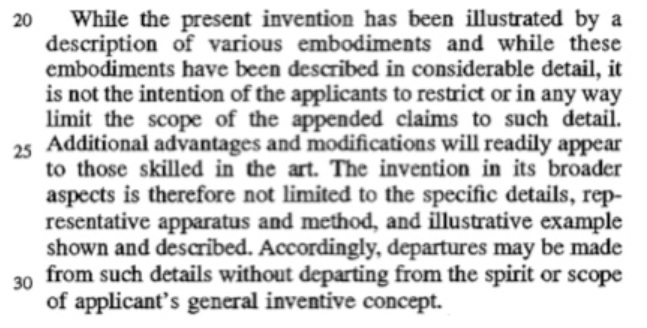 In Northrup Grumman Corp. v. Intel Corp., 325 F.2d 1346 (Fed. Cir. 2003), the Federal Circuit rejected the district court findings and defendant’s argument that Northrup was  relying upon mere boiler plate that “the present invention may be made to conform to any one of a variety of data transfer algorithms.”  However the Federal Circuit did not express any opinion about boilerplate generally, but did find that the patent does not rest upon a mere “boilerplate” suggestion of broad application. It goes on to provide substantive, albeit general, support for that declared intention.

Everyone seems to have a different take on disclaimers from simple matter-of-fact statements, to expositions on claim construction philosophy: 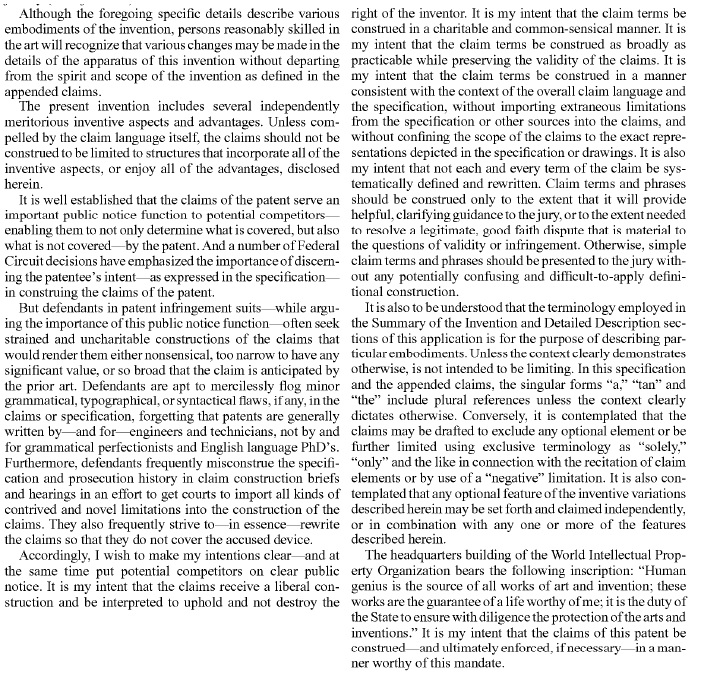 The bottom line is that patent application boiler plate doesn’t seem to cause any harm, and occasionally, it has been helpful.  Better, of course, would be the oxymoronic “custom boilerplate” where stock broadening statements are tailored to the current disclosure. Therefore, there is good reason to include well-thought-out “boilerplate” in an application, although it is no substitute for a well-crafted specification.

All references cited herein are incorporated by reference to the maximum extent allowable by law.

US20120288335. While it is tempting to simply incorporate the material “in its entirety” (how can more disclosure ever be a bad thing?), this can have unintended consequences for example where the incorporated material includes express definitions or disclaimers. Some applications include boiler plate to address this situation:

U.S. Patent No. 8573045. This language might be improved by also excluding any disclaimers. In X2Y Attenuators, LLC, v. ITC, 757 F.3d 1358 (Fed. Cir. 2014), the Federal Circuit held that disclaimers were incorporated into the patent in suit through incorporation by reference.

U.S. Patent No. 7398012. A more complete treatment of incorporation by reference might be:

All patent applications, patents, and printed publications cited herein are incorporated herein by reference in the entireties, except for any definitions, subject matter disclaimers or disavowals, and except to the extent that the incorporated material is inconsistent with the express disclosure herein, in which case the language in this disclosure controls.

As an alternative to a boilerplate disclaimer, the incorporation language might be tailored to the situation:

U.S. Patent No. XXXXXXX, the entire disclosure of which, except for any definitions, disclaimers, disavowals, and inconsistencies, is incorporated herein by reference.

unless, of course, the definitions or disclaimers are important.

Incorporation by reference is a great tool for patent drafters, but as with everything in a patent specification, must be used thoughtfully.