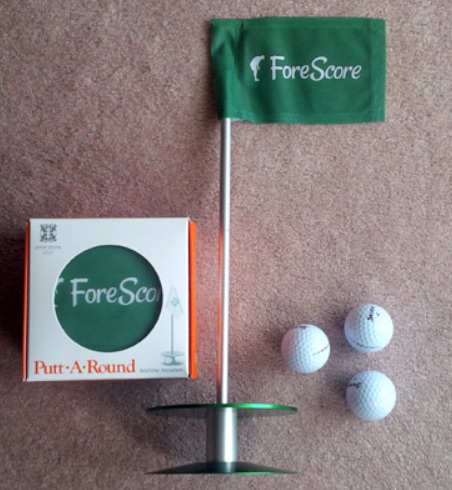 “because the two devices are so obviously dissimilar as to warrant a finding of non-infringement as a matter of law”.

In the words of the court, “[o]ne of the most obvious differences between the products is that top of the lower disk on defendant’s product is noticeably inclined, directing the ball upward to the center where it is held in place. Plaintiff’s design features a flat lower base with what appears to be a washer around the center column that holds the ball. This difference is readily apparent upon even a casual view of the two products.”  The court said that the spaced discs were functional and could not serve as the basis for a determination that its product infringes on the patented design, noting that “all of the prior art shares this feature” and finding that it is “the unique mechanisms among the products that contribute to the overall differences in appearance”.  In the context of the prior art such as U.S. Patent Nos. 1,297,055 and 2,899,207 , the district court’s decision makes even more sense: 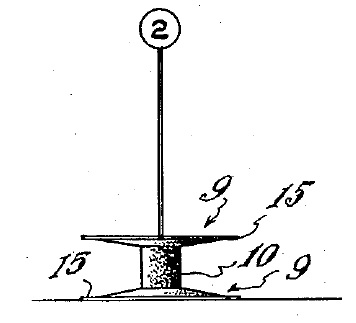 Of note to design practitioners, is that the defendant’s arguments about the cap on the flag pole and the placement of the flag contributed to court’s finding that the designs were different:

Defendant argues that the rounded cap on plaintiff’s flagpole is substantially different from the tapered insert on defendant’s flagpole. The flag of the alleged infringer’s product also covers the top of the flagpole, while the suggested flag on the patented product (which is not a part of the patented design) appears to attach to the pole well below the cap in question, leaving the top of the flagpole visible. When the products are viewed as a whole, this difference adds to the impression that the two products are plainly dissimilar.

Most of the art of design patent drafting is deciding what to show and what not to show, and of what is shown, what is in solid and what is in dashed lines.  The court’s discussion of such details is a reminder to the careful prosecutor to pay attention.

The method of producing collapsed bags having spouts with evacuation form unit inserts connected therein which comprises, for each bag, providing an insert with an elongated form upon which the bag can collapse as it is evacuated which has at least one continuous longitudinal open passage along its length and has an inner open end, joining two opposed webs of material to produce opposed walls of the bag, and before joining the webs applying a spout to one of the webs extending outwardly therefrom and with its inner end open and flexibly securing the form, with its inner end in liquid communication with the spout and extending transversely therefrom to lie flat between said opposed webs so that as each completed bag is filled with liquid the form will swing into the liquid and the bag will collapse around it as it is evacuated. (Emphasis added).

The Federal Circuit said “it is clear from the structure of the clause that the phrases ‘extending outwardly therefrom,’ ‘with its inner end open,’ and ‘flexibly securing the form’ all modify and describe the spout.  This is both logically and grammatically required by the presence of the emphasized “and.”.”  Thus the Federal Circuit rejected the constrution that “flexibly securing the form” was a separate step, and not a modifier of the word spout.

In Mformation the isssue was whether one step (establishing a connection) had to be completed before another step (transmitting).  The Federal Circuit found that wording chosen by the patentee indicated that the connection had to be established, not merely initiated.

Despite the irony that grammar and syntax are critical in a field dominated by drafters who are engineers and scientists, gopd grammar and good claims are not alternatives.  Claim drafters have to chose their words carefully, and the form of the word and the punctuation chosen can significantly change how the claim is construed.

About is one of the great weasel words of patent claim drafting.  Few things look as dangerous to a patent drafter as the sharp edge of a numerical limitation without the blunting influence of “about.”  “About” has been used in the claims of about 22% of utility patents issuing since 1976.  While it is frequently employed by drafters, often not much care is taken in properly defining its boundaries.  In Ferring B.V. v. Watson Laboratories, Inc. – Florida, [2014-1377] (Fed. Cir. 2014), the determination of infringement turned on the meaning of “about” in the phrase “less than about 70%”.  Ferring argued that about meant +/- 10%, based upon some language in a test referenced in the claim language, so that less than about 70% actually meant less than 63% to 77%.  Apotex meanwhile argued that it meant +/- 5%, so that about 70% actually meant less than 66.5 to 73.5%, which did not encompass the less than 75% of Apotex’s product.  In the absence of any defintion in the patent, the Federal Circuit declined to place a numerical limitation on “about,” instead giving about its ordianry meaning:

“About” is not defined either explicitly or by implication by the specification. We think that the district court did not err in giving the term “about” its ordinary meaning and in refusing to give it a more specific construction. See also Merck & Co., Inc. v. Teva Pharms. USA, Inc., 395 F.3d 1364, 1369–70 (Fed. Cir. 2005) (the term “about” should be given its ordinary and accepted meaning of “approximately” unless the patentee clearly redefines “about” in the specification). We affirm the district court’s construction of “about” to mean “approximately,” as well as its refusal to construe “about” to represent a particular numerical error rate.

“About” is a often used and time honored weasel word, but to be used to best effect, some standard should be provided for determining its effect on the so-modified claim element.
construction

In Mformation Technologies, Inc. v, Research in Motion Limited, [2012-1679, 2013-1123] (Fed. Cir. 2014), the Federal Circuit affirmed the grant of JMOL because it agreed that the order of the steps was important to infringement.  The Federal Circuit noted the general rule that “[u]nless the steps of a method [claim] actually recite an order, the steps are not ordinarily construed to require one.” Interactive Gift Express, Inc. v. Compuserve Inc., 256 F.3d 1323, 1342 (Fed. Cir. 2001) (citation omitted).  However, the Federal Circuit went on to explained that a claim “requires an ordering of steps when the claim language, as a matter of logic or grammar, requires that the steps be performed in the order written, or the specification directly or implicitly requires” an order of steps. TALtech Ltd. v. Esquel Apparel, Inc., 279 F. App’x 974, 978 (Fed. Cir. 2008); see also Function Media, LLC v. Google, Inc., 708 F.3d 1310, 1320 (Fed. Cir. 2013) (concluding that a claim that recites “processing” an “electronic advertisement” necessarily indicates that “the creation of the ad must happen before the processing begins”).

The order of the steps in a method claim is in the control of the claim drafter:  if the order of steps is not important, then the draft should make sure the words chosen don’t imply an order as a matter of “logic or grammar.”  Numbering or lettering the steps can also imply an order, and should be used judiciously.