In ATI Technologies ULC v. Iancu, [2016-2222, 2016-2406, 2016-2608] (April 11, 2019), the Federal Circuit reversed the PTAB’s decisions of invalidity of all but one of the claims challenged in three IPRs, finding that the PTAB erred in its application of the law of diligence, and that on the correct law, diligence was shown, thereby antedating the relevant references.

ATI’s U.S. Patent Nos. 7,742,053, 6,897,871, and 7,327,369 were challenged in three separate IPRs. ATI defended on the grounds that the inventions in these three pre-AIA patents were made before the effective date if the asserted prior art. The Board agreed that conception was established before the primary reference dates, and that constructive reduction to practice occurred on the filing date of each patent. However, the PTAB held that ATI had not established actual reduction to practice and had not established diligence to constructive reduction to practice, for all three patents, and invalidated all but one of the challenged claims.

The Federal Circuit expressly rejected the Board’s position that developing and testing of alternative and optional features negated diligence, stating that diligence is not negated if the inventor works on improvements and evaluates alternatives while developing an invention.

Although the significance of diligence to patent law continues to wane ten years after the AIA, because the majority of applications are governed by the AIA and not the pre-AIA law where diligence was required to antedate a reference, the Federal Circuit continues to enforce an element of reasonableness to the determination of this issue (and hopefully others).

The Board concluded that Boyd, whose filing date of April 1, 2002, is about seven months before the October 2002 filing date of the ’188 patent, was prior art to the ‘188 patent under 35 U.S.C. § 102(e). The Board rejected Arctic Cat’s argument of prior conception and diligence in reduction to practice. The Board also rejected the argument that the allegedly anticipatory portions of Boyd are not actually “by another,” as required by 35 U.S.C. § 102(e), even though the only named inventor on Boyd is Mr. Boyd himself, not Mr. Janisch, the inventor of the ‘188 patent.

The Federal Circuit agreed that Janisch had shown prior invention, in particular that the record established that Mr. Janisch was reasonably diligent during the critical period so as not to have abandoned his invention or unreasonably delayed its reduction to practice. While the Board concluded that the evidence did not establish diligence throughout the period from April 1, 2002, to October 29, 2002, the Board’s analysis rested on too rigid a standard, and the record establishes diligence under the correct standard.

The Federal Circuit found that the gaps in activity relied upon by the Board could be explained by third party testing activity and that lack of diligence cannot be inferred from putting the invention into someone else’s hands for needed testing and awaiting test results for a short period commensurate with the testing need, at least where oversight was diligent. That course of action, as a way of reducing an invention to practice, does not give rise to an inference of unreasonable delay or abandonment of the invention.

In Helsinn Healthcare S.A. v. Teva Pharmaceuticals USA, Inc., the Supreme Court affirmed the Federal Circuit that a non-disclosing sale is prior art under post AIA 35 USC §102(a)(1).


A person shall be entitled to a patent unless . . . the claimed invention was patented, described in a printed publication, or in public use, on sale, or otherwise available to the public before the effective filing date of the claimed invention.” 35 U. S. C. §102(a)(1)

At issue was whether or the sale had to be one “available to the public,” given the language “or otherwise available to the public.” The Supreme Court observed that every patent statute since 1836 has included an on-sale bar. including the one immediately prior to the AIA. The AIA retained the on sale bar, and added a catch-all phrase. The Supreme Court concluded that this addition was not enough to change the meaning of “on sale.”

The Court noted that while it had never addressed the precise question presented, its precedents suggest that a sale or offer of sale need not make an invention available to the public. In light of this settled pre-AIA precedent on the meaning of “on sale,” the Court presumed that when Congress reenacted the same language in the AIA, it adopted the earlier judicial construction of that phrase. The new §102 retained the exact language used in its predecessor statute (“on sale”) and, as relevant here, added only a new catchall clause (“or otherwise available to the public”). The Court appeared to agree that the addition of a catchall phrase was a fairly oblique way of attempting to overturn a settled body of law.

The Supreme Court rejected Helsinn’s argument that this construction read out “otherwise” from the statute, and that the associated-words canon requires us to read “otherwise available to the public” to limit the preceding terms in §102 to disclosures that make the claimed invention available to the public. The Court first noted that that the language had acquired a well-settled judicial interpretation, and that the phase “otherwise available to the public” simply captures material that does not fit neatly into the statute’s enumerated categories but is nevertheless meant to be covered. The Court said that “Given that the phrase ‘on sale’ had acquired a well-settled meaning when the AIA was enacted, we decline to read the addition of a broad catchall phrase to upset that body of precedent.”

While the Supreme Court affirmed the Federal Circuit, it did not seem to agree with their rationale, which depended upon the fact that the sale itself was public, even if it was non-disclosing. By extension, it also seems that the Supreme Court would not limit “public use,” another phrase with a well-settled meaning, to disclosing public uses.

Nearly eight years after the passage of the AIA, we finally have some clarity on what is prior art under the statute. At the very least, it looks like the USPTO is going to have to rewrite MPEP 2152.02(d), and hopefully no patents improperly issued because of the Office’s misunderstanding of post-AIA prior art.

“Prior art” is virtually anything before the inventor invention (pre-AIA) or filing date (post-AIA), and there are some amazing examples of the extent patent challengers, and even patent examiners will go in the pursuit of prior art. 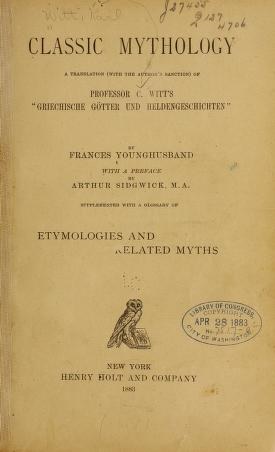 where the Supreme Court invalidated U.S. Patent No. 3,223,070, entitled “Dairy  Establishment,” covering a water flush system to remove cow manure from the floor of a dairy barn, citing the Legends of Hercules from Witt, Classic Mythology (1883).  The Supreme Court noted in a footnote that Heracles cleansed the stables of Augeas, King of Elis, in a single day. 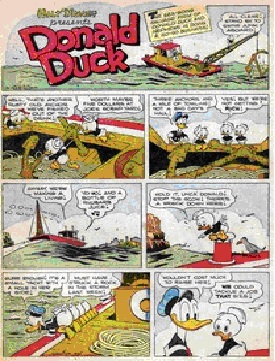 of Raising Sunken or Stranded Vessels.  Mr. Kroyer successfully raised the sunken freighter Al Kuwaita from the bottom of Kuwait harbor by pumping 27 million expanded polystyrene balls to raise the sunken freighter.  He then filed patent applications in Denmark, Great Britain, and the Netherlands.  Things were going well until the Netherlands patent examiner found a Donald Duck cartoon in which Huey, Dewey, and Louie helped to raise Scrooge McDuck’s yacht by filling it with ping pong balls.

Apparently, patent examiner’s spend a lot of time reading comics, comics played an important part in the examination of Great Britain patent application 2117179 on an Entry System for Pets, which the Examiner rejected over a Beano comic strip: 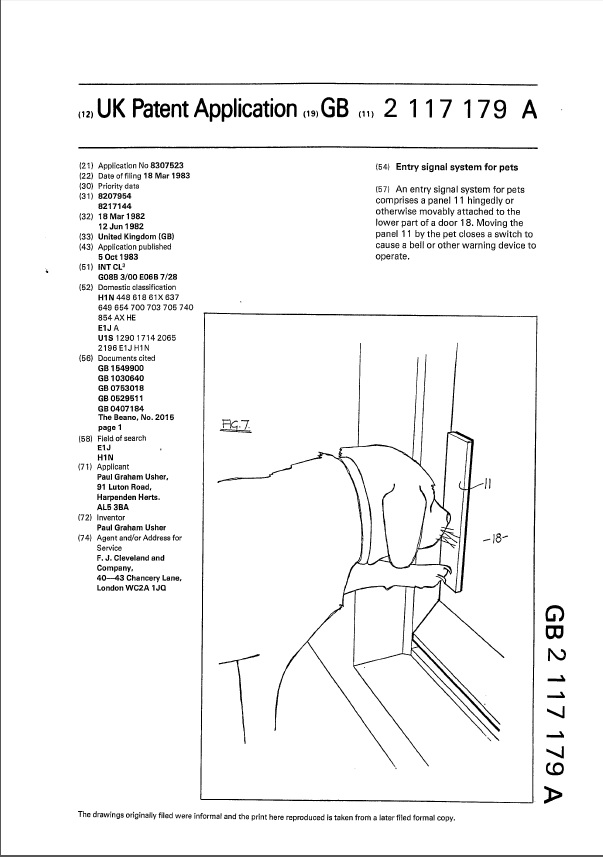 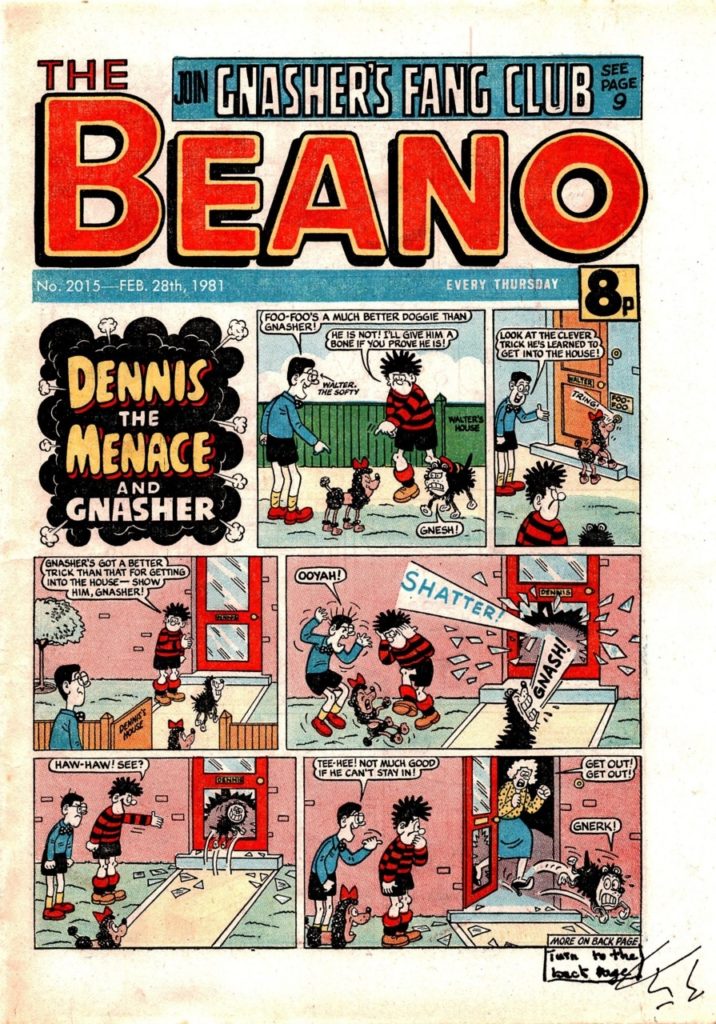 When they are not reading comics, examiners are apparently watching movies because an examiner relied on the movie Borat to reject Patent Application 2009/0216171: 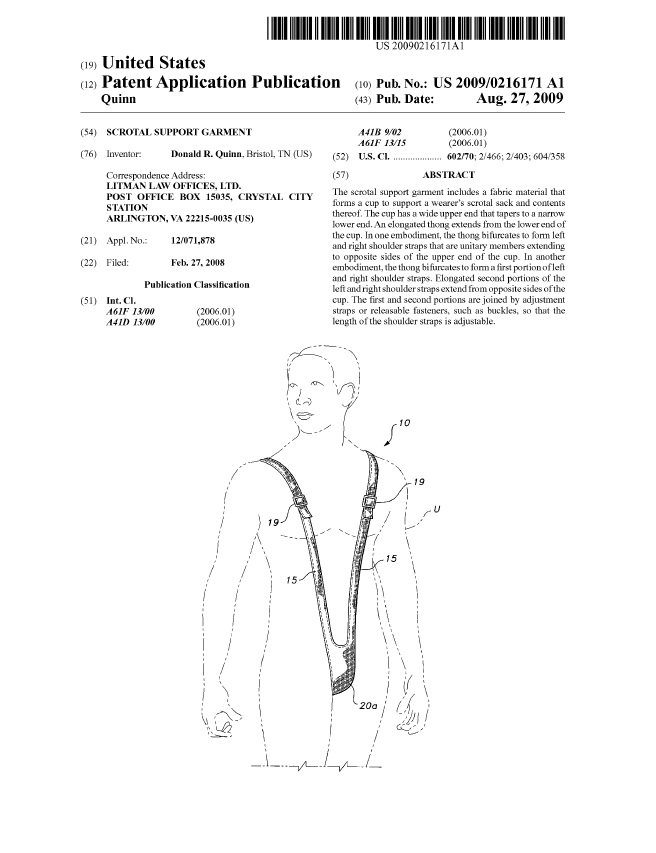 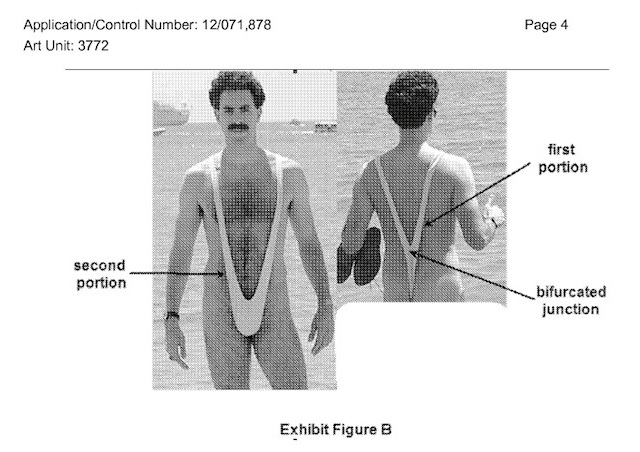 It not just patent examiners who rely upon movies, in defending a suit brought by Apple on its iPad patents, Samsung pointed to tablet devices used by the astronauts in Stanley Kubrick’s 1968 classic 2001 Space Odyssey:

In Circuit Check Inc. v. QZQ Inc., [2015-1155] (July 28, 2015), the Federal Circuit revered the district court grant of JMOL, restoring the jury verdict that three patents on systems and methods for marking interface plates used in the testing of circuit boards were not invalid for obviousness.

The Federal Circuit reasoned that by finding the claims nonobvious, the jury presumably found that the disputed prior art is not analogous and therefore not within the scope of the prior art, and concluded that substantial evidence supports the jury’s presumed finding.  The Federal Circuit explained whether a reference is analogous art depends upon whether it is from the same field of endeavor or if it is reasonably pertinent to the particular problem the inventor is trying to solve.

The Federal Circuit agreed that the asserted prior art — rock carvings, engraved signage, and Prussian Blue — was is not part of the field of circuit board testers and test figures, which meant that the art was only prior art if it was reasonably pertinent to the particular problem solved by the inventor.  The Federal Circuit said that although familiar items may have obvious uses beyond their primary purposes, a reference is only reasonably pertinent when it “logically would have commended itself to an inventor’s attention in considering his problem.”

The jury heard testimony that a person of ordinary skill in the art would not have thought about rock carvings, engraved signage, or Prussian Blue in considering how to mark interface plates, and was entitled to weigh this testimony, find that an ordinarily skilled artisan would not find that the disputed prior art “logically would have commended itself to an inventor’s attention,” and thus find the disputed prior art not analogous.

The Federal Circuit said that:

[a]n alleged infringer should not be able to transform all systems and methods within the common knowledge into analogous prior art simply by stating that anyone would have known of such a system or method. The question is not whether simple concepts such as rock carvings, engraved signage, or Prussian Blue dye are within the knowledge of lay people or even within the knowledge of a person of ordinary skill in the art. Rather, the question is whether an inventor would look to this particular art to solve the particular problem at hand.

Even if the prior art were analogous, the Federal Circuit went on to find that a  reasonable jury could have concluded that QXQ did not prove by clear and convincing evidence that the differences between the prior art and the claimed invention were insignificant.

The Federal Circuit concluded that the jury’s presumed findings regarding the scope and content of the prior art, differences between the claimed invention and the stipulated prior art, and objective considerations of nonobviousness were supported by substantial evidence, and from these a reasonable jury could have concluded that the subject matter as a whole would not have been obvious at the time of the invention. Thus, the district court erred by granting judgment as a matter of law.