The ’454 patent, which generally describes orally dissolvable films containing therapeutic agents. The ’454 patent issued as the fifth continuation of U.S. Patent Application 12/537,571, which was filed on August 7, 2009. This appeal involves the question whether Indivior can get the benefit of that 2009 filing date for the claims of the ‘454 patent, and in particular support for the claimed ranges:

Because Indivior did not contest that the claims would be anticipated without the benefit of the 2009 filing date the court affirmed the invaldity of the challenged claims, except claim 8, whose single data point was supported by the disclosure of the ‘571 patent.

This result is of course concerning to chemical practitioners who have or may one day fine the need to construct a range from disclosed datapoints. The Federal Circuit’s assurances that each case is fact specific is of little comfort if one find themselves in this predicament. The bottom line is if ranges are intended, ranges should be mentioned. It is unlikely that Invidior ever contemplated that the invention only worked at selected points, and not in between, Invidior apparently needed to make explicit what it thought was implicit. The issue in Invidior is not a problem in claiming ranges, but a problem in making clear that you are claiming ranges.

The patents-in-suit are directed to roof mount sealing assemblies, which allow users to mount objects on a roof and seal the mounting location against water.  The District Court determined that the patents-in-suit could not claim priority from the provisional application because the claims were broader than the invention disclosed in the provisional application, and thus the written description requirement pursuant to 35 U.S.C. §112(a).

The Federal Circuit first considered with summary judgement on the issue was appropriate, finding that the patent owner had sufficient notice, so that it was.   The Federal Circuit then turned to the merits, agreeing with the district court that washerless assemblies using attachments other than attachment bracket with the W-shaped prongs were not adequately disclosed in the provisional application, which in no way contemplated the use of other types of attachment brackets in a washerless assembly.  The Federal Circuit added that it was not sufficient for purposes of the written description requirement of § 112
that the disclosure, when combined with the knowledge in the art, would lead one to speculate as to the modifications that the inventor might have envisioned, but failed to disclose.

But the Federal Circuit found that this boilerplate language at the end of the provisional application was not sufficient to show adequate
disclosure of the actual combinations and attachments used in the Washerless Claims. The Federal Circuit noted that adequate written description does not ask what is permissible in view of the disclosure, rather, it asks what is disclosed.

The Federal affirmed that the provisional application lacked adequate written description of what was claimed, and thus did not support a claim of priority. 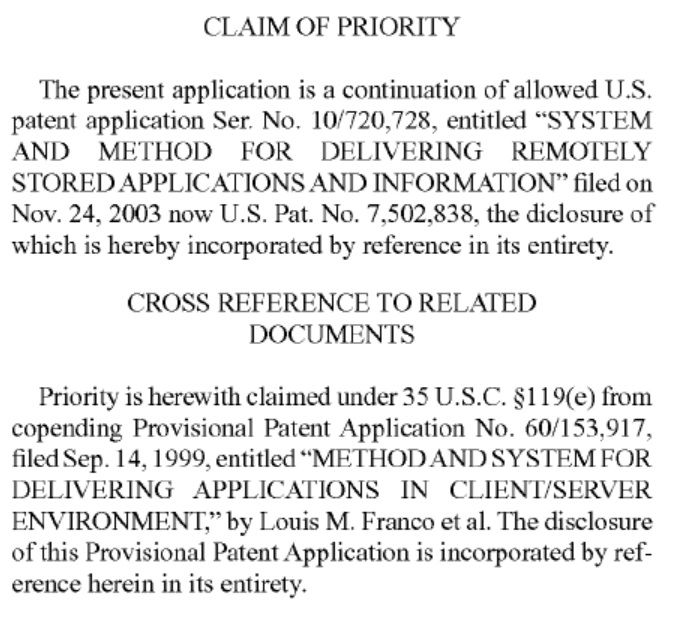 The Federal Circuit reiterated that a patent must contain a specific reference to each prior-filed application to be entitled to those applications’ earlier filing dates, and added that incorporation by reference cannot satisfy this statutorily mandated specific reference requirement. Because the patent at issued contained only a reference to its immediate parent, and not its grand parent, or great grand parent, the Federal Circuit affirmed the Board’s decision finding all claims of the patent invalid as obvious.

The Federal Circuit found that the Board compounded its error by summarily dismissing the activities of the inventor’s attorney.  An attorney’s work in preparing a patent application is evidence of an inventor’s diligence.  The Federal Circuit further found that the Board’s focus on gaps of inactivity also led it to make fact findings unsupported by substantial evidence.

The Federal Circuit instructed that on remand, the question before the Board is whether all of patent owner’s evidence, considered as a whole and under a rule of reason, collectively corroborates the inventor’s testimony that he worked reasonably continuously within the confines of his and his attorney’s occupations to diligently finalize the patent application during the critical period.

The claim construction issues revolved around the construction of “perforated,” in the claim language “wherein at least one of the jaws is perforated to permit the release of steam during use.” The Board reasoned that the specification, which states “the jaws may be perforated or otherwise provided with passages,”  described passages as another form of perforations and did not distinguish between these terms.” Because of this equivalence between perforations and passages, the prior art disclosure of passages anticipated the claims, which required perforations.  The Federal Circuit found that the Board used extrinsic evidence (a dictionary) to establish the equivalence of that perforations included passages.  The Federal Circuit agreed with the patent owner  that the description in the specification that the device “may be perforated or otherwise provided with passages” evidences a difference in meaning between passages and perforations. The Federal Circuit said that the specification’s separation of the terms perforated and passages with the disjunctive phrase “or otherwise” makes clear that the patentee intended that the term “perforated” is not the same as “passages.” The patentee claimed only jaws that are “perforated”; this claim does not extend to passages. In light of the intrinsic record, we conclude that the term “perforated” is not coextensive with or the same as “passages.”

Thus the Board’s finding that JP ’551 disclosed at least one “perforated” jaw because JP ‘551 referenced “a passage” cannot be supported. The Federal Circuit  vacate the Board’s decision invalidating claims 11, 38, 41–44, 46, 47, and 49 over JP ’551 and remanded for proceedings consistent with this construction.

In NFC Technology, LLC v. Matal, [2016-1808] (September 20, 2017), the Federal Circuit reversed the PTAB’s final written decision that claims of U.S. Patent 6,700,551 we obvious, and remanded for the board to determine whether NFC presented sufficient evidence that the prototype embodied the claimed invention

The Federal Circuit said that an inventor’s testimony, standing alone, is insufficient to prove conception—some form of corroboration must be shown.  However, there is no particular formula that an inventor must follow in providing corroboration of conception.  Corroboration is determined by a “rule of reason” analysis, in which an evaluation of all pertinent evidence must be made so that a sound determination of the credibility of the inventor’s story may be reached.

The Federal Circuit noted that the Board’s analysis raised the question of who, if not the inventor, designed the prototype — the named inventor is the only source identified by the evidence for the design
of the prototype. There was no record evidence of any other employee communicating with the fabricator.  The Federal Circuit concluded that under the rule of reason, the totality of the evidence establishes the credibility of the inventor’s account.  Thus, the Board erred in concluding that NFC had not submitted adequate evidence of conception, and in finding that the inventor’s account was not adequately corroborated.
was not supported by substantial evidence.

The Federal Circuit remanded, however, so that the Board could determine whether the prototype embodied the claimed invention.

In Storer v. Clark, [2015-1802] (June 21, 2017) the Federal Circuit affirmed PTAB’s decision awarding priority in an interference to Clark, on the grounds that Storer’s provisional application did not enable the interference subject matter.

The subject matter in dispute involved methods of treating hepatitis C by administering compounds having a specific chemical and stereochemical structure.  Storer was issued U.S. Patent No. 7,608,600, and Clark challenged priority of invention and moved to deny Storer the priority date of its provisional application.  Clark argued that the application did not enable the claimed compound, while Storer argued that the compounds were readily obtained based on the provisional application and the prior art.

Enablement was relevant for validity and to the issue of whether the provisional application was a constructive reduction to practice.  It is a question of law, and is reviewed without deference, although the factual underpinnings of enablement are reviewed for substantial evidence.

Analyzing the disclosure under the factors set forth in In re Wands, the Board determined that undue experimentation would be required to produced the claim compounds from the provisional application’s disclosure.

The Federal Circuit began its analysis noting that the boundary between a teaching sufficient to enable a person of ordinary skill in the field, and the need for undue experimentation, varies with the complexity of the
science.   While the specification need not recite textbook science, it must be more than an invitation for further research.  Further, while the application need not disclose what is well-known in the art, it is the specification, not the knowledge of one skilled in the art, that must supply the novel aspects of an invention in order to constitute adequate enablement.

The Federal Circuit concluded that substantial evidence supported the Board’s findings that the synthetic schemes in Storer’s provisional application did not enable a person of ordinary skill to produce the target compounds without undue experimentation.