In Williamson v. Citrix Online, LLC, [2013-1130] (Fed. Cir. 2015), the Federal Circuit reduced the “strong” presumption that a limitation expressed in functional language without using the word “means” is not subject to 35 USC §112, ¶6 (35 USC §112(f)).   The Federal Circuit concluded that this heighted  burden was unjustified, uncertain in meaning and application, shifted the balance struck by Congress in passing § 112, ¶6, and “has resulted in a proliferation of functional claiming untethered to § 112, para. 6 and free of the strictures set forth in the statute.”  The Federal Circuit announced that henceforth the test of whether the words of the claim “are understood by persons of ordinary skill in the art to have a sufficiently definite meaning as the name for structure.”

While the Federal Circuit criticized its previous “strong” presumption because of its “inappropriate practical effect of placing a thumb on what should otherwise be a balanced analytical scale” one wonders whether a patent applicant can’t put its thumb back on the scale through definitions.  Consider U.S. Patent No. 6167810, which states: 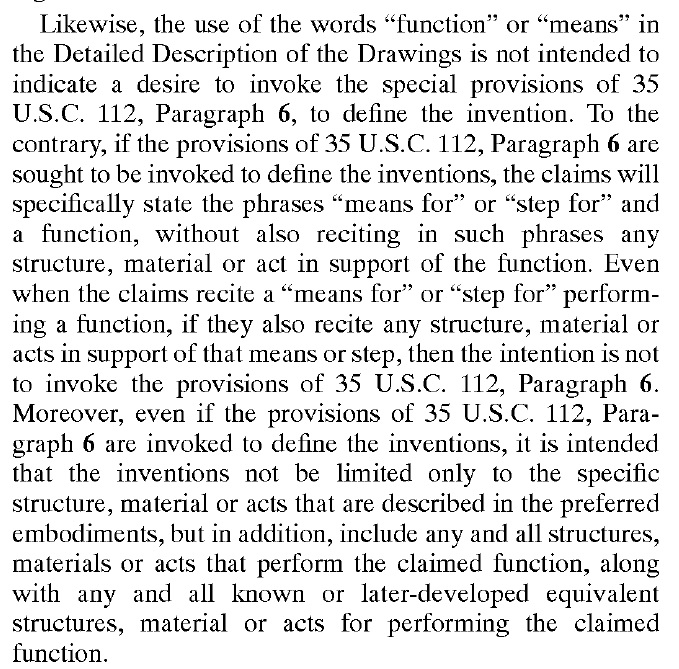 The patentee has attempted to recapture the widely misunderstood meaning of “means” prior to In re Donaldson, by covering all possible means for performing the stated function.  Maybe redefining “means” is a step too far, but if the test really is how the words are understood by persons of ordinary skill, would an express statement that “none of the claim terms are intended to be construed under 35 USC §112(f)” affect how a person or ordinary skill in the art would understand the claims?

Furthermore, if the test is whether the words of the claim “are understood by persons of ordinary skill in the art to have a sufficiently definite meaning as the name for structure” would a definition help to capture the broadest scope?  Consider this language from U.S. Patent No. 6909672: