In an opinion by Judge Newman, the Court relied upon principles of stare decisis, finding that “[a]fter fifteen years of experience with Cybor, we conclude that the court should retain plenary review of claim construction, thereby providing national uniformity, consistency, and finality to the meaning and scope of patent claims.”  The Court said that experience has confirmed that Cybor is an effective implementation of Markman II, and that the criteria for departure from stare decisis are not met.

COMMENT: The defendant may have been confused by the foreseeability test of Festo Corp. v. Skoketsu Kinzoku Kogyo Kabushiki Co., 535 U.S. 722 (2002), which determines the scope of prosecution history estoppel created by a narrowing claim amendment, and thus indirectly the scope of infringing equivlents.  Patent prosecutors can breath easier, but should still strive to write claims broad enough to literally cover foreseeable equivalents.

February 10, 2014, marked the 123rd anniversay of the issuance of U.S. Patent No. 446,054 on the Ouija Board.  As the story is told by descendants of the inventors, the Patent Examiner refused to issue a patent without proof tha the invention worked.

The requested demonstration was made during an Examiner Interview, as dramatically recounted in the Smithsonian in October 2013:

the chief patent officer demanded a demonstration—if the board could accurately  spell out his name, which was supposed to be unknown to Bond and Peters, he’d  allow the patent application to proceed. They all sat down, communed with the  spirits, and the planchette faithfully spelled out the patent officer’s name.  Whether or not it was mystical spirits or the fact that Bond, as a patent  attorney, may have just known the man’s name, well, that’s unclear, Murch says.  But on February 10, 1891, a white-faced and visibly shaken patent officer  awarded Bond a npatent for his new “toy or game.”

Read more:  http://www.smithsonianmag.com/history/the-strange-and-mysterious-history-of-the-ouija-board-5860627/#ixzz2t35YW21m.  What actually happened during the interview is a mystery — a problems with many Examiner Interviews today, despite the provisions of 37 CFR 1.133 and MPEP 716.  We do know that the patent did issue, and that the patent owners used the issuance as an endorsement of the operability of their invention for many years. 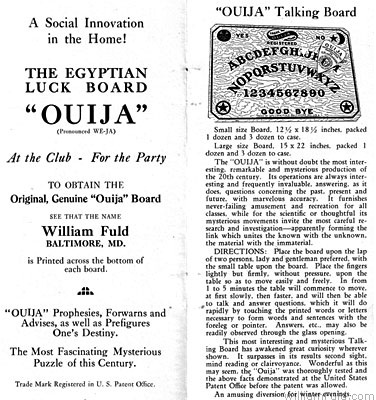 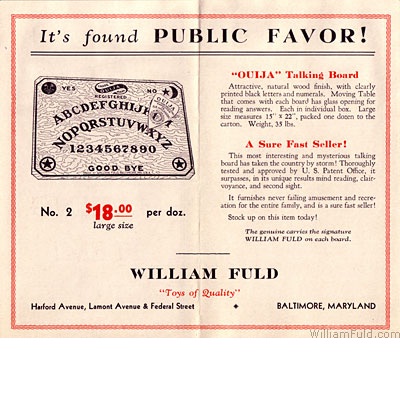 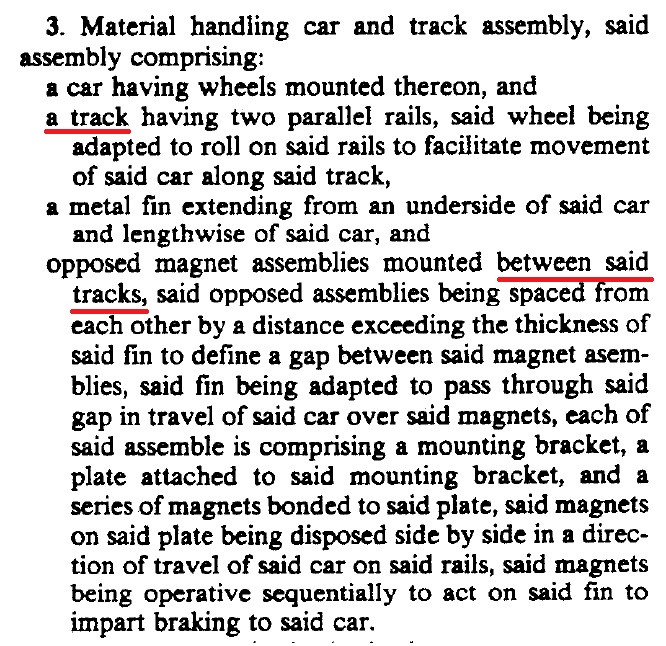 The problem is that Claim 3 specifies a track, but then calls for magnet assemblies between said tracks.  The inventor testitifed that he knew what it meant:

There were serveral possible fixes, none of which were made.  Precisely because there were serveral fixes, Magistrate Thynge found that correction would be subject to reasonable debate, so that Court was unable to correct the error under Novo Indus., L.P. v. Micro Molds Corp., 350 F.3d 1348, 1354 (Fed. Cir. 2003).  The Magistrate granted summary judgment that claim 3 of the ‘125 patent is invalid for indefiniteness under 35 U.S.C. § 112, Paragraph ¶2.

Even of the District Court does not adopt this part of the Magistrate’s recommendation, at a minimum the less than precise language of claim 3 wasted time and resources of the patentee.  Words of a patent claim are critical, and everyone connected with the patent is responsible for making sure it is correct.